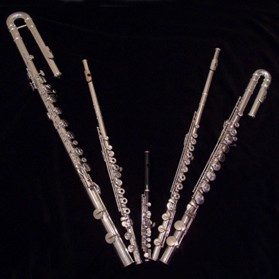 Less than half the size of the Concert Flute, the Piccolo ranges from D2 to D5 and is a transposing instrument, sounding an octave higher than written. The Piccolo began appearing in orchestras in the early 18th Century and is featured heavily in music of a rhythmic or military nature.

The most common variant of flute, the Western Concert Flute is aptly named given its wide use in many different ensembles include concert bands and orchestras. The Concert Flute is non-transposing with b (half step below c1) being the lowest pitch and written note. The flute has an approximate range of three octaves with c4 being the highest standard pitch used. Innovations in the late 19th Century helped to expand the range above high c4 to include c#4 thru f4.

This flute is another transposing instrument that sounds a minor third higher than written. It is smaller than a C Flute and is mainly utilized in a flute choir. Due to its smaller size, the Eb Flute is oftentimes the flute in which younger children are introduced to.

Both thicker and longer than the C Flute, the Alto is pitched in the key of G which gives it a sound that it is perfect fourth lower than written. The Alto, with its distinct mellow tones, requires a bit more breath to play and can come either with a curved headjoint for smaller players or a straight headjoint which provides better intonation but requires more of an arm span to play.

Often confused with the Alto Flute, the Bass Flute is also has a long tube that requires the use of a curved headjoint. The Bass Flute is pitched in the key of C and has a sound that is one octave lower than written. It is used primarily in flute ensembles and flute orchestras.
Contrabass Flute: Referred to as a “gentle giant” this rarely seen flute is pitched a full 2 octaves lower than written and has a range that is similar to that of a C flute with its lowest performable note being two octaves below middle C. The Contrabass Flute is used almost exclusively in flute ensembles.